Guided Implantology enables a new approach to Implantology, emphasizing the accuracy of the surgical process and the predictability of treatment’s results, so it offers many advantages for patients that are scared by pain.  In fact, Guided Implantology guarantees a superior predictability of our treatments, with an absolutely lower invasiveness: is no more necessary to open gums, ungluing wide patches, to insert our implants; this avoids the bleeding and the post-operative discomfort.
The surgery is planned on the computer, through a 3D software, after the execution of a denta-scan (CT scan of the jaw bones), using a radiological mask that will be changed in a chirurgical mask, that will guarantee a precise and guided implant’s insertion. Implants can be planned and placed for every indication, from single elements to cases of complete edentulous. It is also possible, when bone’s thickness allows this, to immediately put a provisory after the surgery ( immediate load). In this way the patient undergo the guided Implantology surgery, within two or three hours, can get again his unremovable teeth and obtain optimal aesthetical results, with an excellent biological integration and the minimum discomfort possible.

The Straumann is the only home implant that allows, with its SLActive implants surface of covering, a more quick healing of only two weeks for the lower arch.
This surface has substantially improved outwards properties, such has hydrophilicity and chemical activity, which hasten in a significant manner the whole osseointegration process. The same home implant has got a brand-new Zirconia-Titanium alloy that is called Roxolid® , which offers superior reliability in the treatment with implants of small diameter, because it is more resistant.
The use of implants with an inferior diameter allows avoiding complex maneuver of bone regeneration in cases of thin ridge. 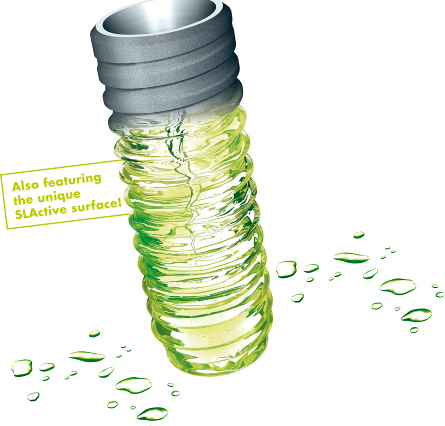